Karen and John grew up in the Hebrides but moved away for a while for university and careers. The couple have always enjoyed growing their own food – even when the only space available was a back garden in a city!

Now, with three young daughters, the couple are back in Lewis and have expanded their outdoor growing space to include an island garden and a croft. Earlier this year Karen and John added a Polycrub via the Crofting Agricultural Grant Scheme (CAGS). 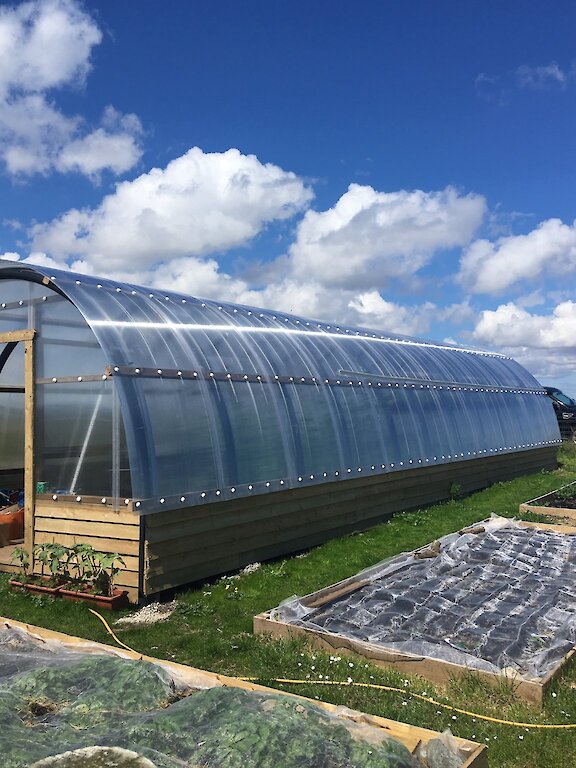 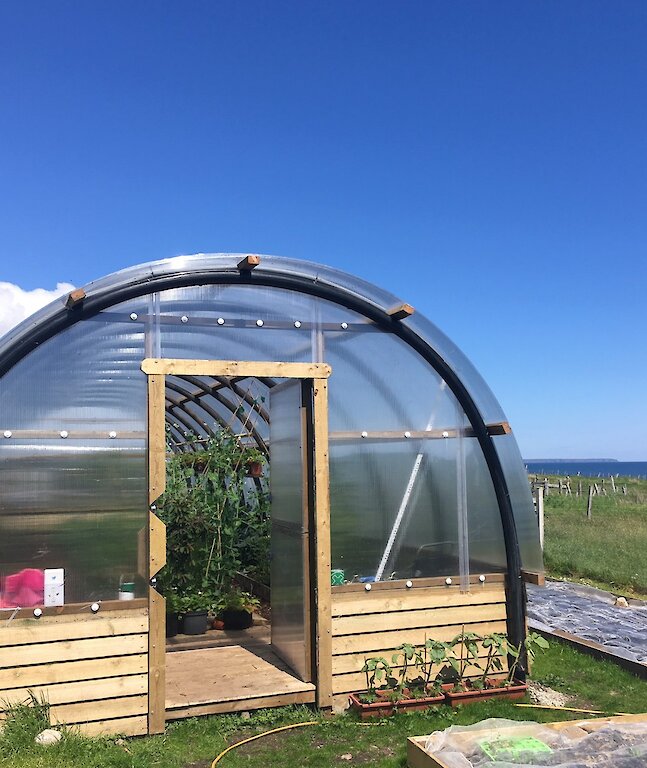 In a few short months, their Polycrub is a stunning, green oasis, packed full of mouth-watering fruit and veg. The family is already well on the way towards fulfilling their crofting business plans to supply organic, soft, red fruits to the local market, in season. Just five months after the Polycrub was completed, the family was already winning prizes for their Polycrub produce at the local Point Agricultural Show. 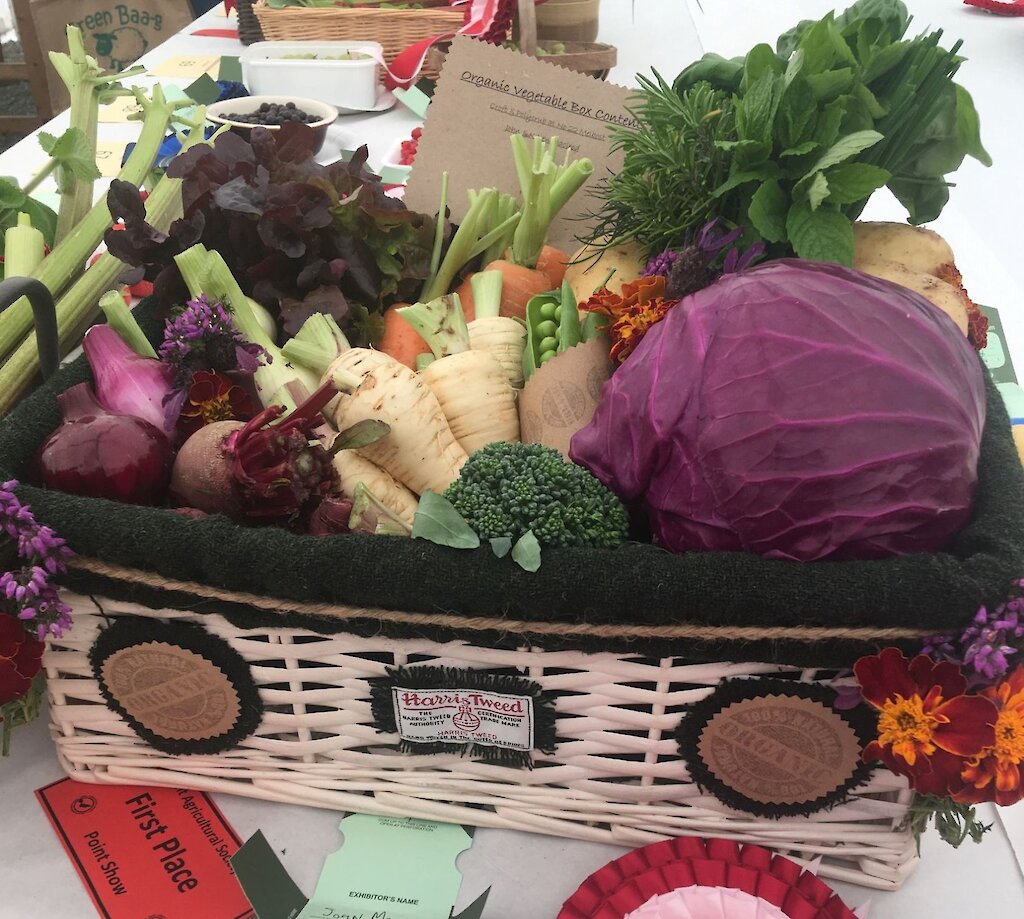 Pre-Polycrub, the family, who has a strong organic ethos, has always grown a multitude of produce outdoors. Everything was grown from their own seed and planted out in raised beds, under enviromesh.

The crops were very successful, but, like Shetland, the Hebridean climate limited the types of fruit and veg that could be grown outdoors. The weather often made growing outdoors a bit of a challenge; it could be pretty miserable on a dreich day – especially for three small children.

All that has changed for the family with the addition of the Polycrub! Karen said, ‘It’s amazing inside there – working, sweating, laughing and then there’s a hailstone shower outside and although you almost can’t hear each other with the noise of the shower, it’s totally safe, warm and sheltered! That’s the life!’ Their Polycrub is very well laid out and sports hanging shelves, raised beds and a decked area for potting up and socialising. 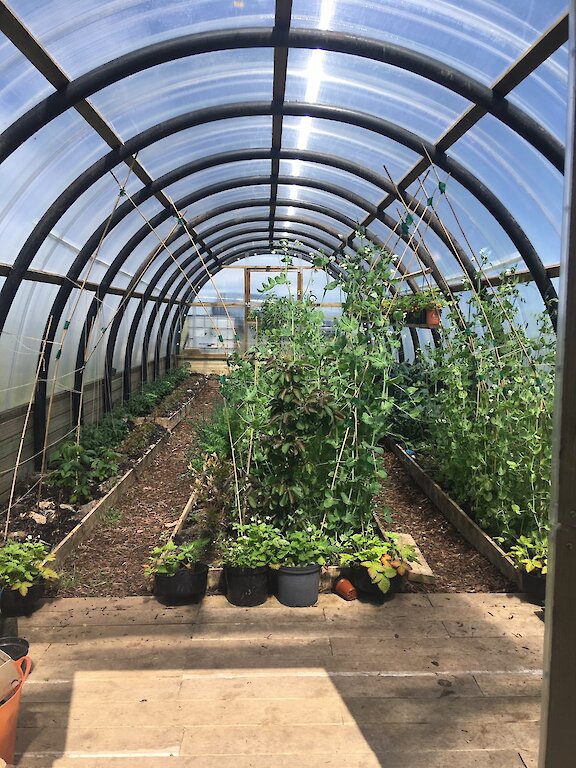 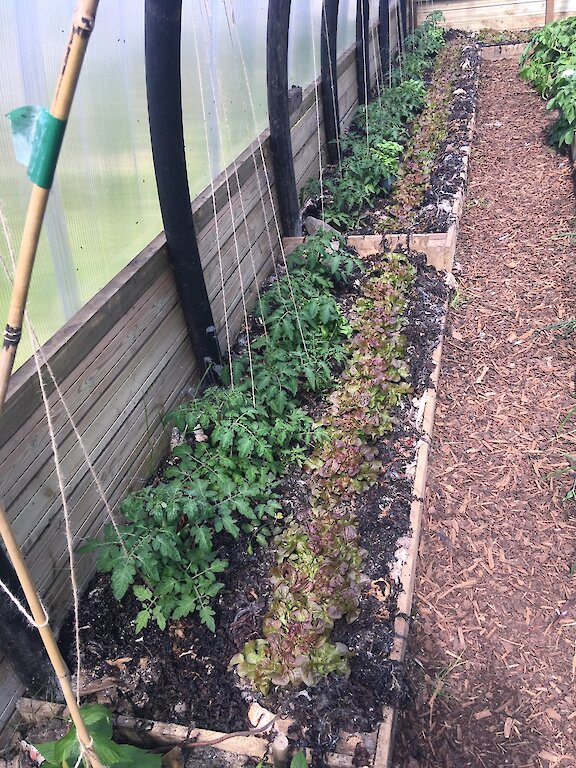 They work on a no dig, totally organic basis, outside and in. Sweet, crumbly, compost is created by mixing their organic and garden waste with cow and horse manure from nearby crofts, grass cuttings, cardboard, newspaper and loads of seaweed from the shore at the bottom of their croft.

Karen also makes a ‘seaweed soup’ to feed plants, especially the fruiting strawberry and tomato plants. Seaweed is used as a mulch, but also to prepare new raised beds, Cardboard or newspaper is spread on the grassy area and layered with seaweed. This kills off the grass and retains the nutrients while allowing the no dig system. Soil is added, followed by more seaweed, newspaper and finally, some home-made compost.

The composting process is boosted by the addition of eight black hens. The birds are enjoying their job of cleaning the bugs and seeds from the compost heap. This is a great supplement to their diet, along with some grains as a treat and shell sand from a local croft – a perfect little organic eco system! 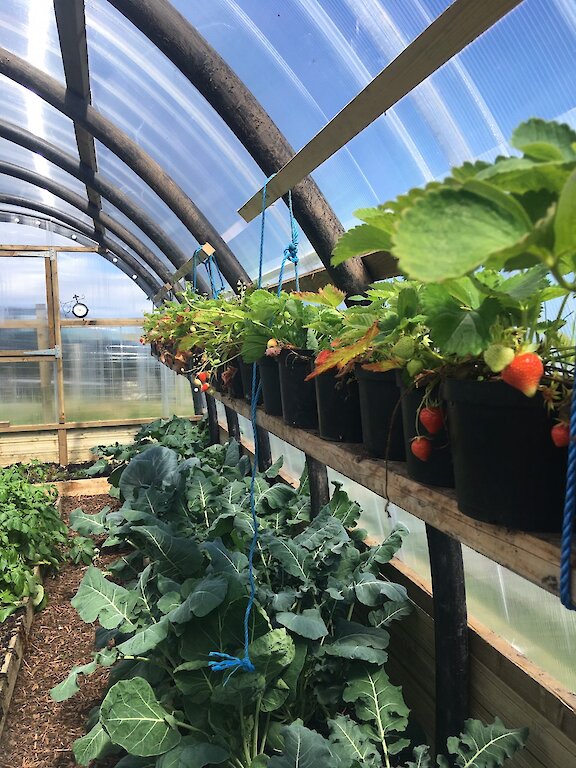 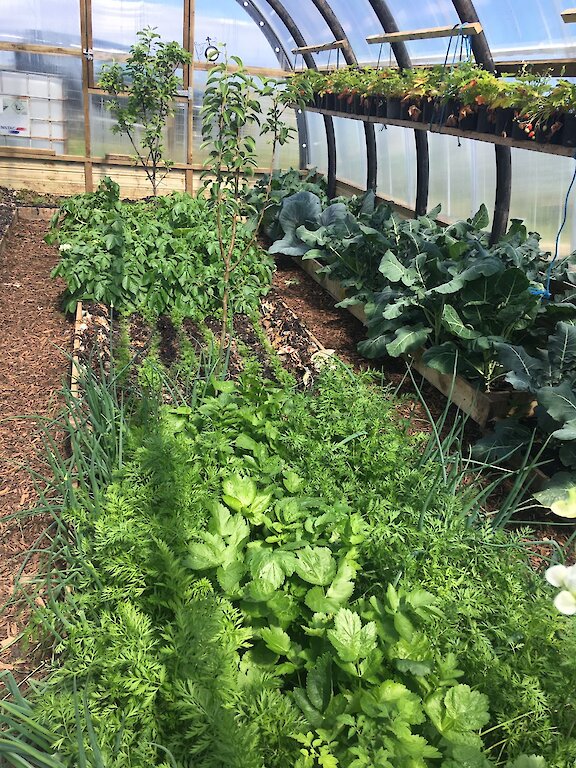 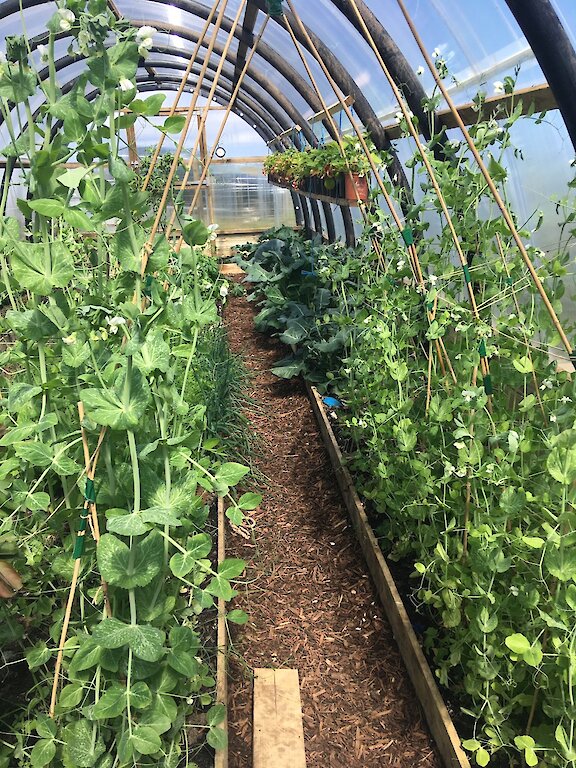 When she’s not tending to her plants, Karen can be found in her pantry. She’s busy making beetroot or indulging in her passion for fermented food by preparing home-made Sauerkraut or Kombucha, a mildly fizzy, slightly sour health drink. Karen hopes to add chutneys to her winter larder this year.

As part of their crofting diversification plan, John and Karen plan to sell tomatoes, strawberries and raspberries to local shops, in season. As a mum, Karen feels this range of produce will appeal to the tastes and needs of a busy family.

Karen, John and their eight-year-old daughter and six-year-old twin daughters are clearly enjoying their Polycrub so far. ‘We love it dearly and this is only the beginning’, said Karen. Max, the family Springer Spaniel also loves it dearly and he is never far from Karen’s side - even on the hottest of days in the Polycrub! 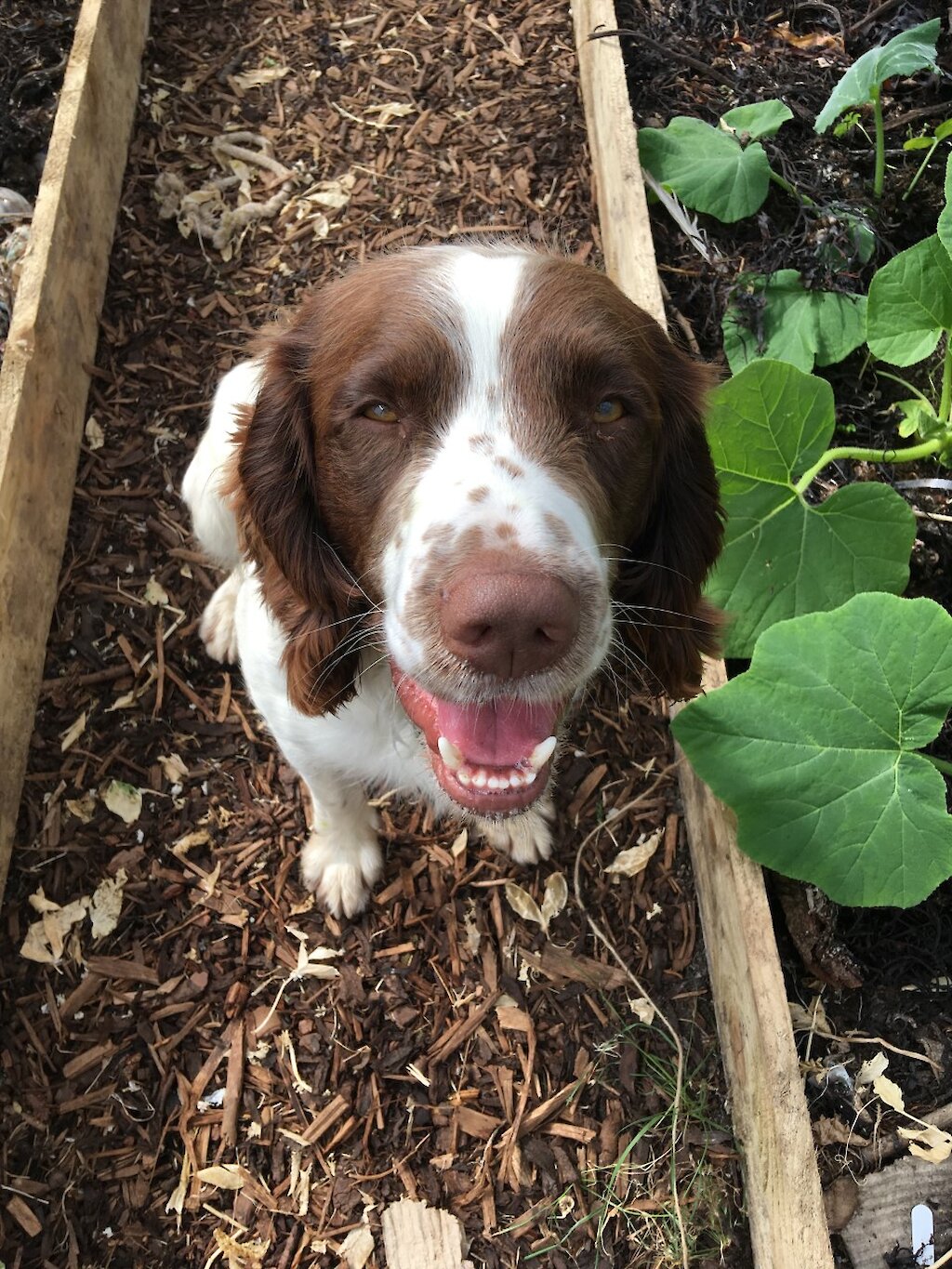